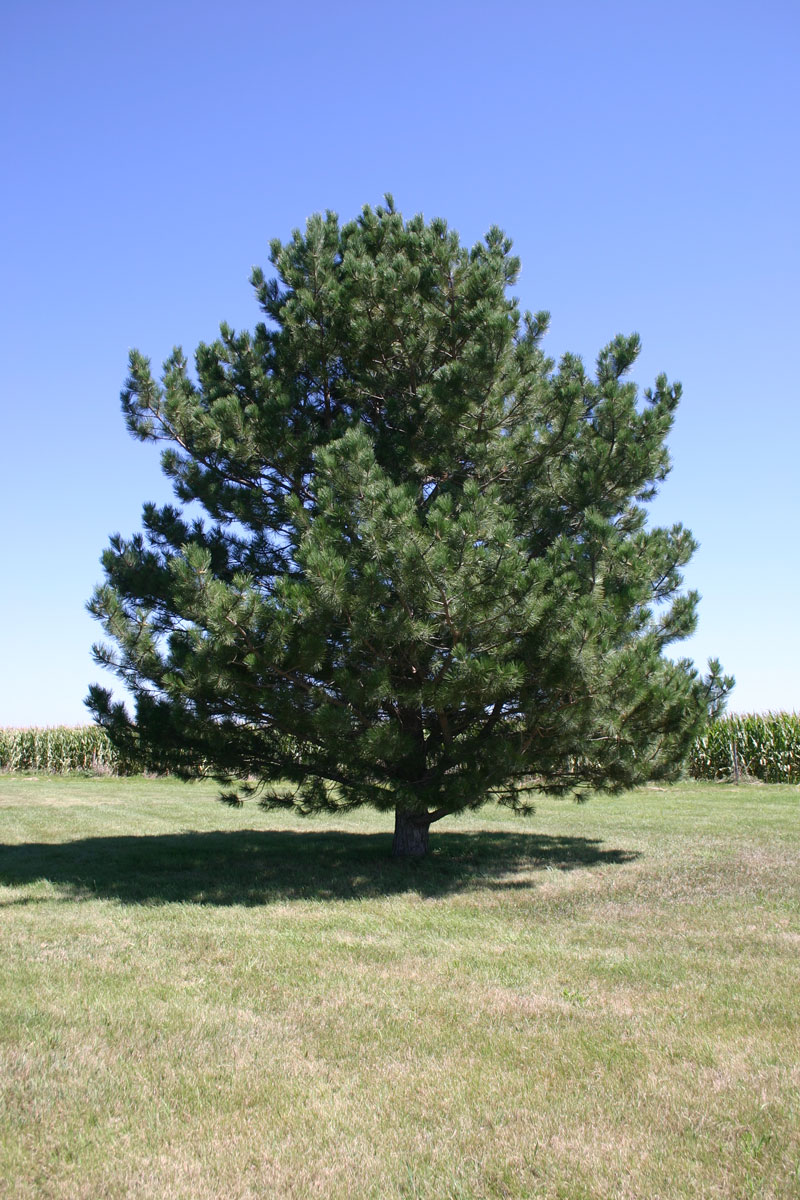 Pinus nigra, or Austrian pine, is native to western Europe. Introduced to this country in the mid-1800's, it has been planted extensively as an ornamental and conservation plant. In Kansas, Austrian pine grows to a height of 30 to 50 feet with a spread of 20 to 25 feet. On most soils, growth rate is usually 12 to 18 inches per year.

Leaves, Stems and Fruit
Young trees are pyramidal in shape, but become oval with age and, on some sites, flat topped. Noted for its dark, rich green foliage, Austrian pine provides a pleasant contrast with other plants.  Austrian pine needles are stiff, usually straight, 2 to 4 inches long and are in groups of 2 . Needles persist 2 to 3 years. Fruit is a 2 1/2 to 3 inch long cone. The cone scales do not have prickles. The attractive bark has dark furrows with gray or gray-brown mottled ridges. Winter buds have a distinct silver color.

Use
Windbreaks - Austrian pine's symmetrical, stout, spreading branches serve well in windbreaks and living snow fences. It may be used in single or multi-row windbreaks and living snow fences. It is used primarily in windward (north or west) or central rows.
Wildlife Habitat - Several woodland species of birds utilize the seed, but it is not an important part of their diet. Its greatest asset is winter protection. Many kinds of wildlife find cover in Austrian pine branches.
Christmas Trees - Austrian pine may be used to produce Christmas trees. It provides some variety to the more popular Scotch pine and is more drought tolerant, but it tends to develop slower than Scotch pine. Typically Austrian pine is 8 to 10 feet tall before filling in to form a satisfactory Christmas tree.

Adaptation and Soil
Austrian pine had adapted statewide and grows best in deep, moist and well-drained soils, but it will grow on a wide variety of soils. Of the pines it is second only to ponderosa in drought tolerance and will grow successfully in fairly heavy clay.

Spacing
Austrian pines are spaced 8 to 12 feet within a row and 12 to 18 feet between rows. Large, fast growing deciduous trees should be spaced far enough (20 to 24 feet) between rows to prevent shading pines.

Pests
Common insect pests include spider mites and pine needle scale.  Common diseases include Dothistroma needle blight and Sphaeropsis (Diplodia) tip blight. Pine seedlings may be injured or killed by rabbits and may be protected by rabbit protective tubes.