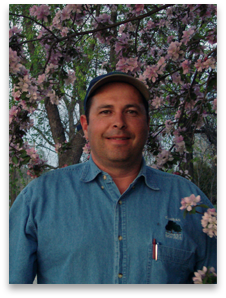 Dave Bruton grew up near Meriden, Kansas. He attended the forestry program at Kansas State University from 1984-1986, then transferred to the University of Missouri-Columbia where he received a Bachelor of Science Degree in Forest Management in 1988. Upon graduation, he moved to Lawrence, Kansas where he was employed by Lawrence Landscape, Inc. as an Urban Forester.

Dave began his career with the Kansas Forest Service in 1992 as a District Forester, responsible for the Glacial Hills RC&D Region. His district then expanded to include the entire northeast region of Kansas. Dave became the Utilization and Marketing Forester in July of 2000 maintaining that position until January 2009 when he once again became the Northeast District Forester. In 2016, he shifted back to the Marketing and Utilization role. He also serves as the liaison with the Kansas Christmas Tree Growers Association.

Dave is a Certified Forester with the Society of American Foresters and an active member of the Great Plain Society. He is also a member of the National Wild Turkey Federation.