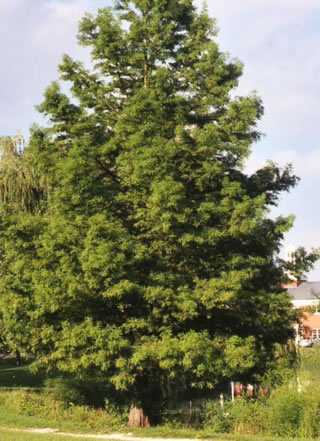 Native Range
Taxodium distichum, or Baldcypress, is native to swampy (freshwater) areas throughout the Southeastern United States. It is not native to Kansas.

Mature Size
This is a large tree reaching a mature height of 60 to 100 feet with variable crown spread.

Growth Rate
Where soil moisture is abundant, this tree may grow as much as 18 inches per year.

Leaves, Stems and Fruit
The needle-like leaves are 1/2 to 3/4 inch long, light green in summer and coppery bronze in fall. They are arranged in two ranks in a feather-like fashion on slender twigs. Unlike most conifers, this one drops its leaves in the fall. Stems are light green initially becoming reddish brown and rough surfaced by the end of the first season. By the second or third season, the bark develops a cinnamon brown color. The fruit is a 3/4 to 1 inch cone which usually disintegrates at maturity. Seeds are irregular in shape. An unusual characteristic of this tree is that the roots, in swampy areas, form woody structures called "knees" which stick up around the tree. Their height is thought to be related to soil moisture. Knees normally don't form in Kansas except on wetter sites.

Adaptation and Soil
Baldcypress has adapted to the eastern third of Kansas and grows best on moist, fertile, well-drained soils, but does well on most soils with good moisture. It tolerates seasonal droughts often losing its foliage which does no long term damage to the tree. As long as adequate moisture is available, it responds well to fertilizer.

Spacing
Space Baldcypress 8 to 18 feet within rows and 12 to 18 feet between rows.

Culture
One-year-old, bare-root seedlings (14 to 18 inches tall) are used in conservation plantings. During the establishment period, supplemental watering and control of competing vegetation will aid survival and early growth.

Pests
Rabbits favor young Baldcypress. Protective measures may be required to get this plant established.