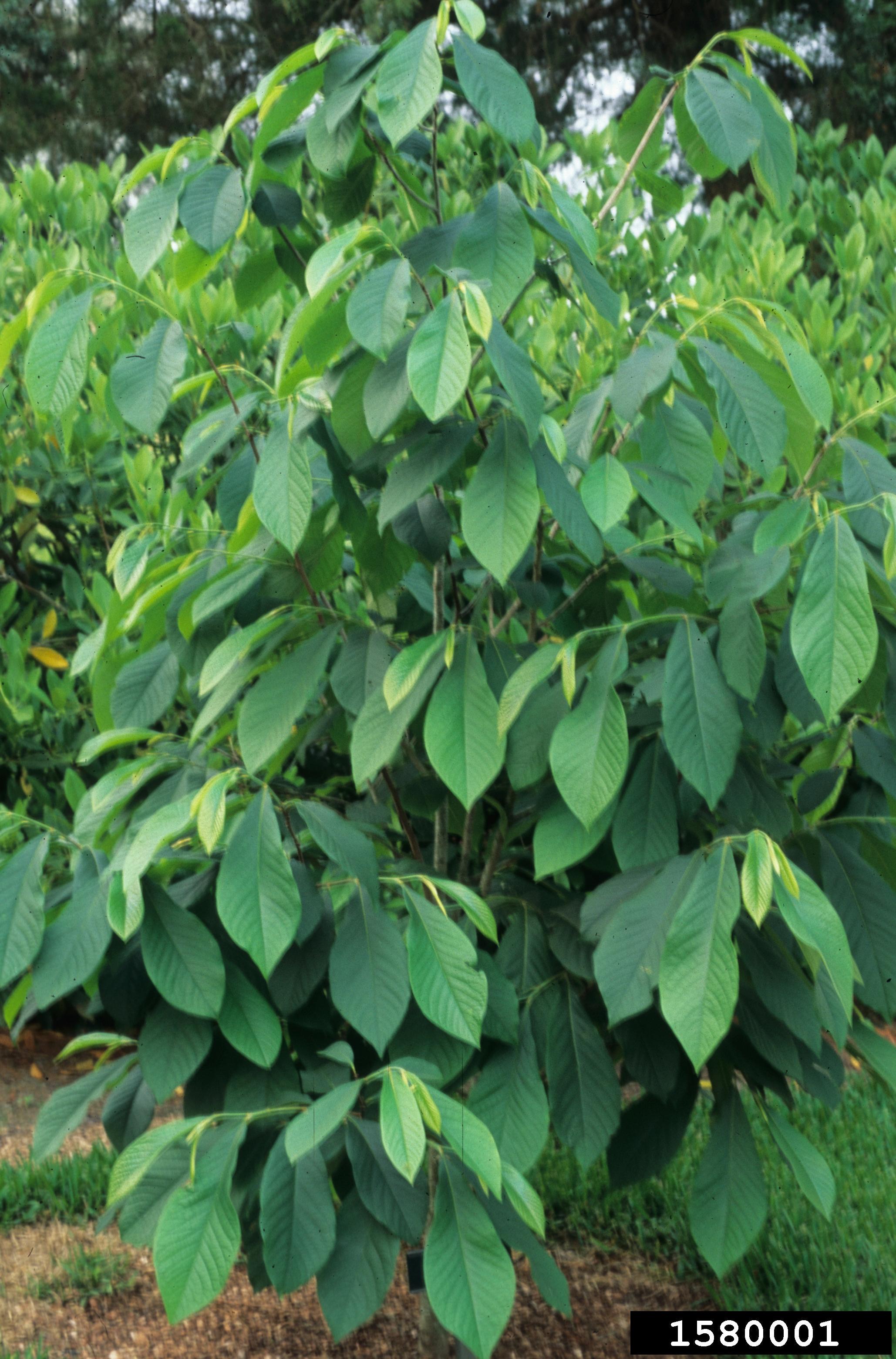 Asimina triloba, or Pawpaw, is native to eastern Kansas and grows naturally in the understory of hardwoods in moist soils found along river bottoms and creeks. It is a small tree that grows approximately 15-30 feet tall and resembles a tropical tree in appearance. Its fruit is a favorite of multiple wildlife species and can be eaten by humans as well. Caution should be taken however, as some people are allergic to it. The fruit has an unusual taste of a cross between bananas and mangos, pineapple, or other tropical fruit and is rich is vitamins. Once established they reproduce through both seeds and rhizomes, however plants do not readily spread to the point that they are invasive but do tend to grow in small patches.

Leaves, Stems and Fruit
Leaves are simple, alternate, 7 to 10 inches long, and 3 to 5 inches wide. They are widest at the outer end and taper down to a sharp point at the branch. The bark is dark brown, thin, and appears to have small “warts” throughout. The fruit matures in October and is a pale green to yellow in color. They are about 3 to 5 inches long and about 2 inches around. When ripe they start to turn blotchy brown and slightly soft like a slightly ripened banana.

Use
Wildlife Habitat - Excellent wildlife tree. Animals of varying species love the fruit and finding fruit for human consumption may be difficult because of animal competition.
Human Consumption - Flavor of a cross between a banana and a tropical fruit such as mango or pineapple. Some humans may be allergic to the fruit so caution should be taken until you know for sure. Fruit can be eaten raw after removing the skin or made into pies, custards, cookies and other deserts.

Adaptation and Soil
Pawpaw requires fertile moist, deep soil. They naturally occur along creeks and river bottom land in the understory of hardwood trees. However, they also will grow in full sun as long as the soil is as previously described and are adequately watered. They will not tolerate poor soils that are lacking nutrients such as heavy clay soils or extremely sandy soils. They do not tolerate areas that are subjected to intense, direct wind exposure. Limited to eastern one-third of Kansas.

Culture
One-year-old, bare-root seedlings 18 to 24inches tall are used in conservation plantings. They will develop faster with good weed and grass control.

Pests
Few disease and insect problems. Rabbits and deer may be a problem as is common with any hardwood species.