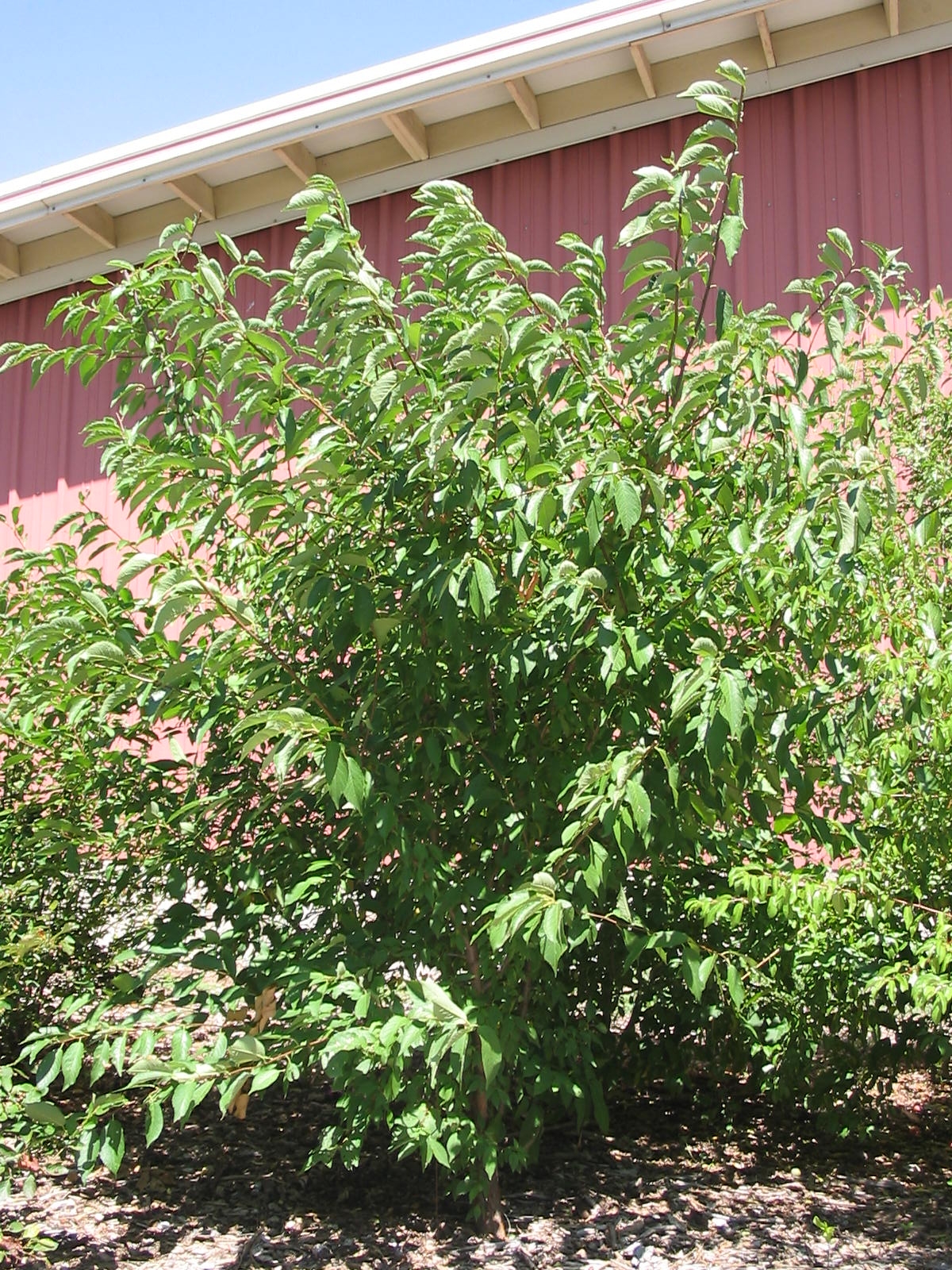 Prunus americana, or American plum, often called Wild plum, is native to most of Kansas. It is the most common wild plum in Kansas except in the west where Sand Hill plum dominates. Found naturally in pastures, road sides and woodland borders, it has also been planted extensively throughout Kansas.

Mature Size
American plum reaches a height of 12 feet with good growing conditions, but on more restrictive sites it may only reach 6 feet. Sprouts from spreading root systems form thickets up to 35 feet wide.

Growth Rate
It grows at about 12 to 18 inches per year.

Leaves, Stems and Fruit
Leaves are alternate, 2 1/2 to 4 inches long, oval or elliptic with tapered tips and sharp teeth along leaf edges. Flowers are white, forming in early April before leaves appear. Fruits mature in August. They are red or orange with a slight whitish film ranging from three-quarters to one inch long. Twigs are rigid and often spine-tipped.

Use
Windbreaks - American plum may be used as the outside row of a windbreak. Its dense growth is ideal for reducing the wind velocity near the ground. White flowers make it attractive in the spring. Some people find its thicket forming habit objectionable in windbreaks.
Wildlife Habitat - This is one of the more popular woody plants for use in developing wildlife habitat. The thorny thicket is valuable for songbird and gamebird nesting, loafing and roosting. Various other animals also use it for loafing, bedding and escape cover. The fruit is eaten by numerous birds and other animals.
Water Erosion Control - Development of suckers from the root system makes American plum effective in stabilizing stream banks and gullies. It will tolerate several days flooding.
Human Food - The fruit is used for making wine, jam and jelly.

Adaptation and Soil
American plum has adapted statewide and in a wide range of soils, but grows best in deep, moist soils.  Avoid planting in especially droughty soils.

Culture
One-year-old, bare-root seedlings 18 to 24 inches tall are used in plantings. Survival generally is very good. Although somewhat tolerant of weed and grass competition, they will develop faster with good weed and grass control.

Pests
Insects and diseases may cause problems with this species, but usually not serious. Rabbits will occasionally chew on the bark, but the plant forms new sprouts to replace the injured stems.