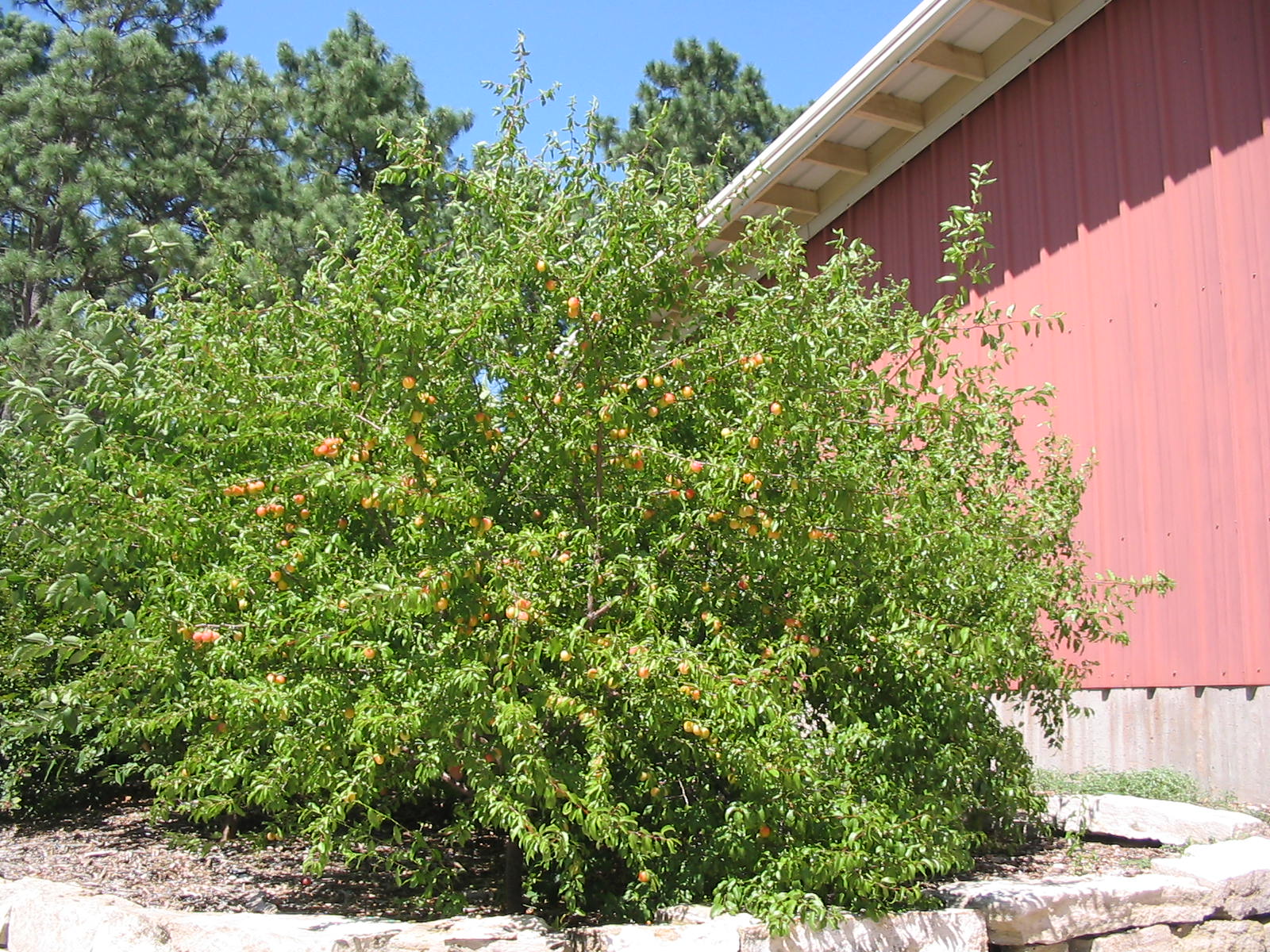 Prunus angustifolia, or Sand Hill plum or Chickasaw plum, is native in much of Kansas. It is the most common wild plum in western Kansas. It is found naturally on sandy prairies where it is very effective in  stopping blowing sand. Sand hill plum is similar to American plum, both form thickets from roots suckers. They differ in site characteristics and plant and leaf size.  Sand hill plum grows to a height of 3 to 4 feet with a spread of 4 to 6 feet.  It grows at about 12 to 18 inches per year.

Leaves, Stems and Fruit
Leaves are elliptical with small teeth on the edges. The 1 to 2 1/2 inches long leaves are slightly folded lengthwise with the tip curled down and are located on alternate sides of the twig. Flowers are white and form in early April before leaves appear. Fruits are bright red or orange with a whitish film and three-quarters to one inch long. They mature in late June or July and persist to mid-August. Twigs are rigid and often spine-tipped.

Use
Wildlife Habitat - Sand hill plum is a popular plant for use in developing wildlife habitat on sandy soils. The thorny thicket is valuable for songbird and game bird nesting, loafing and roosting. Various other animals also use it for loafing, bedding and escape cover. The fruit is consumed by numerous birds and other animals.
Windbreaks - This plant may be used as the outside row of a windbreak for ground level wind protection. White flowers are attractive and fragrant in the spring. Some people find its thicket forming habit objectionable in windbreaks.
Water Erosion Control - Sand hill plum is very effective in stabilizing blowing soil. It is also used to stabilize stream banks and gullies.
Human Food - The fruit is used for making wine, jam and jelly.

Adaptation and Soil
Sand hill plum has adapted statewide and grows naturally on sandy soils, but will perform well when planted on heavier clay-loam soils.

Culture
One-year-old, bare-root seedlings, 18 to 24 inches tall, are used in plantings. Sand hill plum seedlings are not as vigorous as American plum seedlings. Control of weed and grass competition during the first and second years is important in survival and early growth.

Pests
Insects and diseases may occasionally attack this species, but usually are not a serious problem. Rabbits may chew on the bark, but new sprouts will form to replace injured stems.