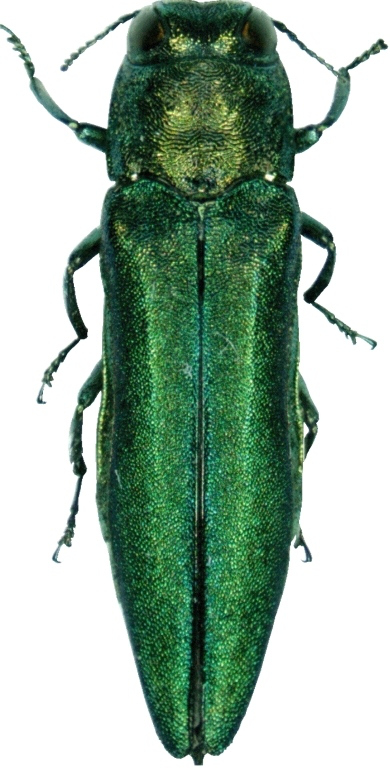 Emerald Ash Borer (EAB) is an exotic invasive beetle from eastern Russia and northeastern Asia that likely was brought to the U.S. in infested packing material. This beetle threatens our urban and riparian forests by killing North American ash species (Fraxinus sp.) and their cultivars. At least 70 million ash trees have been already been destroyed due to EAB, and it appears likely that the nearly 9 billion North American ash trees will be eventually be functionally extirpated from the continent.

Adults are usually present during the summer months (May-August) depending on the weather patterns. A few weeks after eggs are deposited in crevices in the bark they hatch and the larvae begin to chew through the outer bark to the phloem. When feeding they begin forming S-shaped galleries (July-October) that expand as they grow. This feeding disrupts the transport of water and nutrients within the tree. The larvae overwinter as prepupae in the sapwood and in the spring after a few weeks pupate and emerge as adults (May-June) creating a D-shaped exit hole. As adult beetles, they feed on the foliage during their 3-6 week lifespan, mate, and then the process begins again each year. Weather is a key player on timing for the beetle. For example: if it is a warmer than usual year then emergence and flight will occur earlier.

What does EAB look like?
What are the signs or symptoms of EAB?
Why should Kansans care about EAB?

Green ash was planted in many of our urban and rural settings. A loss of this tree in our landscape will have a significant impact on the ecology and economy of infested areas. The loss of ash in floodplain shelterbelts will reduce crop protection. Riparian corridors will be impacted as large gaps, due to the loss of green ash (a significant component of the overstory in our riparian forests) allow increased light to alter the quality of these areas. In addition, the financial cost to municipalities, rural and urban property owners, nursery operators, and industries related to forest products will be significant. Depending on the vigor of the tree, an infested tree can die from the top down within 4 years.

Ash is a common component in our urban and rural forested areas. There are an estimated 56.1 million green and white ash trees in our rural and urban landscape. Most occur along rural riparian areas, but the 1.5 million ash trees that occur in our towns and cities will cost much more in removal, stump grinding, and replacement. The economic impact of removing thousands of street and yard trees will need to occur not just for mitigation, but also because the dead trees pose a hazard and liability.

A community tree assessment protocol has been running since 2011 to inventory pine, walnut and ash in Kansas communities. This will be used to help community officials estimate removal and replacement costs if these insects become established.

What can Kansans do to prevent EAB?

In recent years, when EAB was discovered in a state, federal and state quarantines were enacted over a geographical area such as a county.  As of 2021, the federal and state quarantines have been allowed to expire, but it is still important to reduce the risk of EAB by not moving potentially infested material. Ash tree parts (saw logs, branches) and nursery stock, have a greater chance of being infested, and therefore should not be moved from the area to lower the risk of spreading the insects to new hosts.  EAB is active when the weather starts to get warm. Their active period could start as early as April and go into September if high temperatures persist.

EAB is dormant inside the tree during the late fall and winter months. During this timeframe, pruning and removal of trees is desired. If an entire ash tree cannot be removed, the outer inch of bark and wood can be chipped (less than 1 inch in two dimensions), and take to a facility that will process the material or where it can be burned or buried. This ensures that any EAB that is present in the material will be destroyed. If the tree poses a hazard during the time the beetles are active, then chip at minimum the outer inch of bark and wood to less than an inch.  Then it can be processed.

Learn the basic signs and symptoms of EAB. Attend workshops in your local area provided by Kansas Forest Service or your local KSU extension. Do not bring firewood from another state. Use local sources for firewood where you are traveling in the state. Remember that a landscape with several types of trees is more resilient to the insect, disease and environmental threats that exist or could occur in the future.