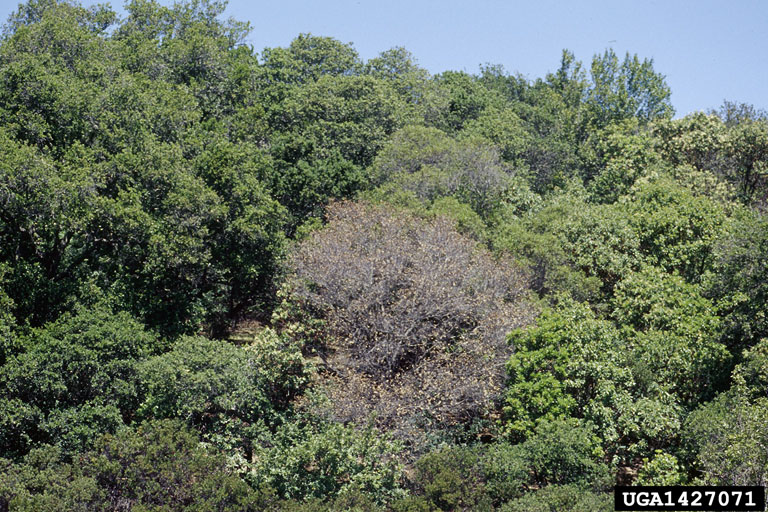 In June 2019, the causal agent of Sudden Oak Death (SOD), Phytophthora ramorum, was detected in rhododendrons originating from Park Hill Plants nursery in Oklahoma, and plants from that nursery were shipped to 60 Walmart stores across Kansas and one Home Depot store in Pittsburg, Kansas.

The full press release from the Kansas Department of Agriculture can be found here, or at the KDA SOD website.

Sudden Oak Death (SOD) is caused by Phytophthora ramorum, a water mold pathogen. The pathogen is also the cause of the Ramorum Leaf Blight, Ramorum Dieback and Phytophthora Canker Diseases. SOD was first detected in the San Francisco Bay Area in the mid-1990s. It was first recognized as killing trees in Oregon forests in in 2001. The SOD pathogen is considered especially dangerous because it affects a wide variety of trees, shrubs and plants and there is no known cure.  The pathogen has killed millions of tanoak and coast live oak trees along the central CA coast into Southern OR and is a concern because it also infects rhododendron, camellia and other common horticultural nursery plants.

The oak forests of Kansas are predominately in the eastern third of the state, and while most native oaks like bur oak are of the potentially less-susceptible white oak group, there are millions of red, black, pin, shumard, blackjack, shingle, and other oaks that could be impacted should this disease gain a foothold in the state. Unfortunately, few details are certain about how this pathogen might affect the species that are native to our central hardwood forests, so we'd encourage the public to be proactive in taking steps to ensure this disease does not spread from rhododendrons or other infested plant material into our community forests and rural woodlands.

What is Phytophthora ramorum and what does it infect?

Phytophthora ramorum is a fungus-like organism that causes a disease commonly known as Sudden Oak Death (SOD). On the west coast of the United States it is a serious problem in California coastal oaks and bay laurel. It can also infect a broad range of nursery plants at which point it is referred to as Ramorum blight. Other susceptible plants include rhododendron, azalea, camellia, viburnum, lilac, and periwinkle. A link to a longer host plant list is provided below. It can also infect oaks in the red oak group, including several species of oak native to Kansas.

On oak trees, P. ramorum causes bleeding cankers on the trunk and a decline of the tree. Underneath the bark, the cankers have defined margins with a reddish-brown color.

With the recent findings in container rhododendrons, our immediate concern is nursery plants. On nursery plant hosts the symptoms are often leaf scorch or foliar blight and sometimes a stem canker. Websites at the bottom of this article provide additional photos. The symptoms can be confused with common problems such as sunscald. Phytophthora ramorum rarely causes death of nursery plants, but they serve as a source of infection for other nursery plants and to native oak plants.

The Phytophthora diseases are called water molds and they are triggered by wet conditions. Kansas has had significant rain this spring, so conditions have been favorable for the disease.

How is Phytophthora ramorum spread?

Long distance spread of this disease is through the movement of infected nursery plants between states. The disease can survive in infected plant tissue, soil and water, so local movement into landscapes would be through infected plant material. Spread from Rhododendrons in the landscape to nearby oak trees would be through aerial splash dispersal (ie rainfall) or water runoff.

What should I do if I purchased a Rhododendron this spring?

The Kansas Department of Agriculture is working with the affected Walmart and Home Depot stores to eradicate the diseased plants. To help reduce potential spread of the disease, homeowners who have purchased Rhododendrons from these stores should dig up the plant, including the root ball, double bag it in plastic, and send it to the landfill. Garden tools and shoes/boots that contacted the suspect plant should be sanitized with a commercial disinfectant before using them in other areas of the landscape. Contact the store where the plants were purchased to discuss a refund, as K-State and KDA cannot provide information about refunds. KSRE county extension agents can help homeowners with questions. A website to help find your local agent is at this website: https://www.ksre.k-state.edu/about/stateandareamaps.html

What is the risk for Kansas oaks?

This is the first introduction of Phytophthora ramorum into Kansas and the Kansas Department of Agriculture, Kansas State University, and the Kansas Forest Service will continue to monitor its progress. The disease is a threat to Kansas forests and landscapes. K-State Research and Extension will be sharing information on the disease as developments occur. Phytophthora ramorum was first detected in the US in California in 1995. Its impact is still being assessed by the United States Department of Agriculture and the United States Forest Service.

Kansas oak forests occur primarily in the eastern third of Kansas, the western edge of the central hardwood forests. The red oak group is known to be susceptible to sudden oak death. Potentially susceptible Kansas species may include red oak (Quercus rubra), black oak (Quercusvelutina), pin oak (Quercuspalustris), blackjack oak (Quercus marilandica), shumard oak (Quercus shumardii), scarlet oak (Quercus coccinea), and shingle oak (Quercus imbricaria). Factors that would affect the potential movement of Phytophthora ramorum into Kansas oak forests would be the presence of infected plants (such as Rhododendron) planted into home landscapes in oak water sheds, along with wet weather. Spring 2019 has been very wet and conducive to disease. The risk for Phytophthora ramorum establishment into oak plantings in western Kansas is lower than eastern Kansas because it is typically drier and there are fewer susceptible trees, but there still is risk.