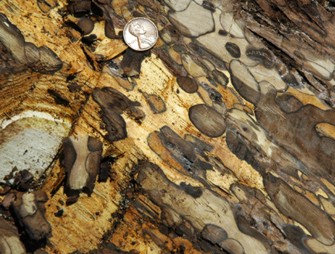 A relatively newly recognized disease (2008) first noticed in the western U.S. is called thousand cankers disease (TCD). Currently TCD is located in both the east and western parts of the U.S. It has not been detected in Kansas.

This disease is a caused by a combination of a fungus (Geosmithia morbida) and the walnut twig beetle (Pityophthorus juglandis). The walnut twig beetles carries fungal spores, and when they tunnel through the outer bark into the tree the fungus is transmitted during gallery construction. This has also been found if the beetle “tastes” the tree and does not produce a gallery. The fungus kills an area under the bark and the areas of dead tissue are called cankers. When the walnut twig beetles are abundant, numerous cankers can form and coalesce to girdle twigs and branches, restricting movement of water and nutrients. Black walnut (Juglans nigra), the most valuable native species to the state, is the most susceptible of the Juglans species to this disease.

The beetle itself is dark yellowish brown and about the size of a flea (1.5-2.0 mm – 3x longer than wide). It is native to North America, and was first described in 1928 from western New Mexico, where the presumed host was Arizonia walnut (Junglans major).

What is the fungus?

The fungus is a previously undescribed species of Geosmithia and the origin is unknown as of yet. Limited research and data show that the fungus in the West is complex and exhibits the type of genetic diversity of a long established species.

How do I look for symptoms and signs of TCD?

The early symptoms to look for include the yellowing of foliage scattered on upper branches during the growing season. This is called flagging. Later, several limbs may die back and the thinning of the canopy will occur. Progressive dieback on symptomatic limbs will spread throughout the crown. Wilting and browning of the leaves during the growing season (leaves remain on the branch) in Colorado was indicative of the final stages of the disease. Epicormic shoots may develop along the tree trunk or from the roots, giving the tree a bushy appearance below dead branches. Usually within three years after initial symptoms, trees will die. The development of the disease may vary depending on such conditions as site characteristics, initial plant vigor, host species, and other factors.

Signs of the disease are beetle exit holes that have a “shot gun shot” appearance. These exit holes are found along branches greater than 2 inches. In both the western and the eastern states that have infestations, beetle galleries and cankers have been found on the southwest/west sides of the trunk and undersides of branches.

Unfortunately, the cankers from the fungus rarely show any of the external symptoms that are associated with most canker producing fungi that affect trees. The galleries are under the bark and may contain the beetle larvae that are very very tiny. Cankers (brown to blackish dead tissue) will be surrounding the galleries that are small or larger. Be very careful when peeling the bark to view cankers and do not cut too deeply; the beetle galleries and fungus initially are found in the bark (phloem) and not in the cambium or sapwood. Individual cankers may originally be only a few millimeters in diameter, but ultimately can enlarge to 3 cm or more in length and often are oval to elongate in shape. Typically a shallow tunnel produced by the walnut twig beetle will be present near the center of the canker. Eventually the cankers coalesce to damage larger, irregular areas of the bark. They also extend down to the vascular cambium, resulting in a brown to black discoloration of the sapwood.

No. Beetle tunneling is primarily limited to the tree bark and extends very shallowly into sapwood causing no injury to marketed wood. Similarly the Geosmithia fungus grows phloem and does not produce any deep staining. Neither of the two species associated with thousand cankers will affect the quality of the wood in any manner.

Preventing the spread of TCD to Kansas

At this time there is no control or treatment for the lethal disease TCD. One of the main pathways of spread is through the transportation of walnut logs and/or firewood. This is why several states have passed quarantines restricting the movement of black walnut logs, nursery stock, and other regulated articles. This disease is very new and research into the genetics and biology of both the walnut twig beetle and the fungus are in progress.

Performing the following tasks will help prevent the spread of TCD:

What can be done to help prevent TCD from spreading to Kansas?

Be familiar with the Kansas Dept. of Agricultures quarantine.