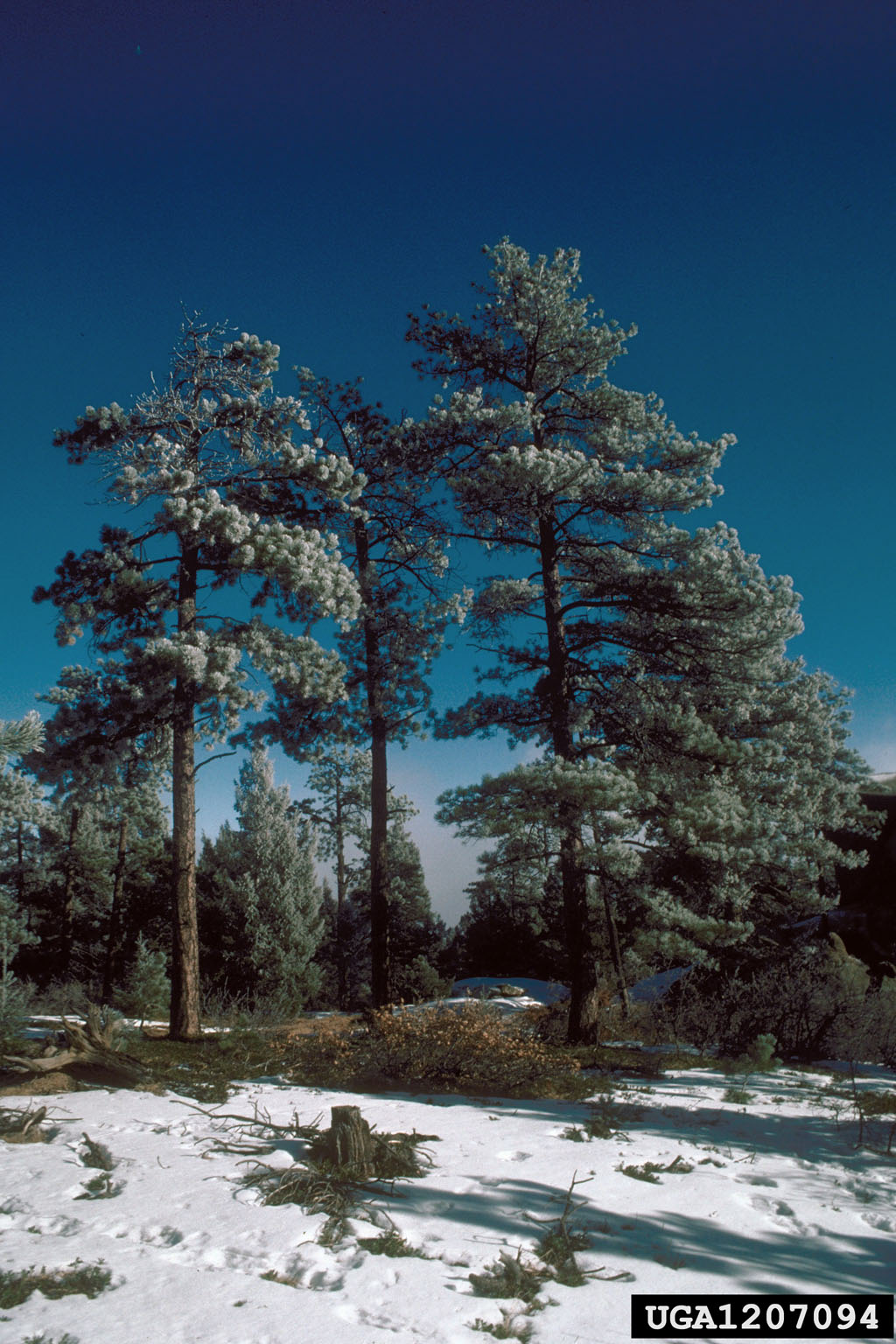 Pinus ponderosa, or Ponderosa pine, or Western yellow pine, is native west of the western fringes of the Great Plains.  It is the toughest pine introduced to Kansas with the greatest drought and alkaline tolerance. Although it may exceed 200 feet in height in its native range, Ponderosa pine reaches a height of 40 to 50 feet and a spread of 20 to 25 feet in Kansas.  Its growth rate is often 12 to 18 inches per year.

NOTE: We use the Valentine, Nebraska, seed source due to its resistance to Dothistroma Needle Blight and tolerance to Pine Tip Moth.

Leaves, Stems and Fruit
It is an upright, somewhat pyramidal and open tree with dark or yellowish green foliage. The needles are stiff, 5 to 11 inches long and in groups of 2 or three on the same tree. Needles persist about 3 years. Flowers are inconspicuous. The fruit is a 3 to 6 inch long cone. The cone scales terminate with a stout recurved prickle. Bark and young stems have a vanilla odor when bruised. On young trees the bark is nearly black and deeply furrowed. Older (trunk larger than about 18 inches) tree bark becomes yellowish-brown to orange-yellow and has a plate-like appearance.

Use
Windbreaks - It may be used in windward or central rows of windbreaks or living snow fences, and will also perform well as a single row windbreak. Like all of the pines offered in the Conservation Tree Planting Program, ponderosa pine needs full sun light. Don’t plant large, fast growing deciduous trees on the south side of Ponderosa pine.
Wildlife Habitat - Ponderosa pine provides some nesting, loafing and roosting cover for a variety of birds, and offers winter protection for many wildlife species.

Adaptation and Soil
Ponderosa pine has adapted statewide, but due to the lower humidity levels, it is better suited to western Kansas. It grows on a variety of soils and is somewhat more tolerant of droughty and alkaline soils than other pines, but it is intolerant of wet soils.

Spacing
Ponderosa pines are spaced 8 to 12 feet within a row and 12 to 18 feet between rows. Space at least 20 to 24 feet from large, fast growing deciduous trees.

Culture
Two-year-old, bare root and container grown seedlings are used in plantings. Both bare root and container grown seedlings are 8 to 12 inches tall. Typically the seedlings grow very little in height until the third year. During this establishment period, supplemental watering and control of competing vegetation will aid survival and early growth. Large, fast growing deciduous trees should be spaced far enough (20 to 24 feet) between rows to prevent shading the pines.

Pests
Nantucket pine tip moth is a serious pest to most Ponderosa pine in its early years. Selected seed sources, however, have proven to be tolerant of this pest. Trees grown from seed collected from north-central Nebraska or south-central South Dakota may be attacked by tip moth, but continue to develop at a rapid rate and eventually become resistant. Ponderosa pines offered through the Kansas Tree Planting Program are grown only from seed collected from these sources. This tough tree should be planted more extensively in western Kansas, and tip moth should not be considered a major pest.  Common insect pests include Nantucket pine tip moth, spider mites, pine needle scales and grasshoppers. Common diseases include Sphaeropsis tip blight, Dothistroma needle blight and brown spot. The severity of these diseases tend to be minimized by the low humidity in western Kansas. Pine seedlings may be injured or killed by rabbits and may be protected by rabbit protective tubes