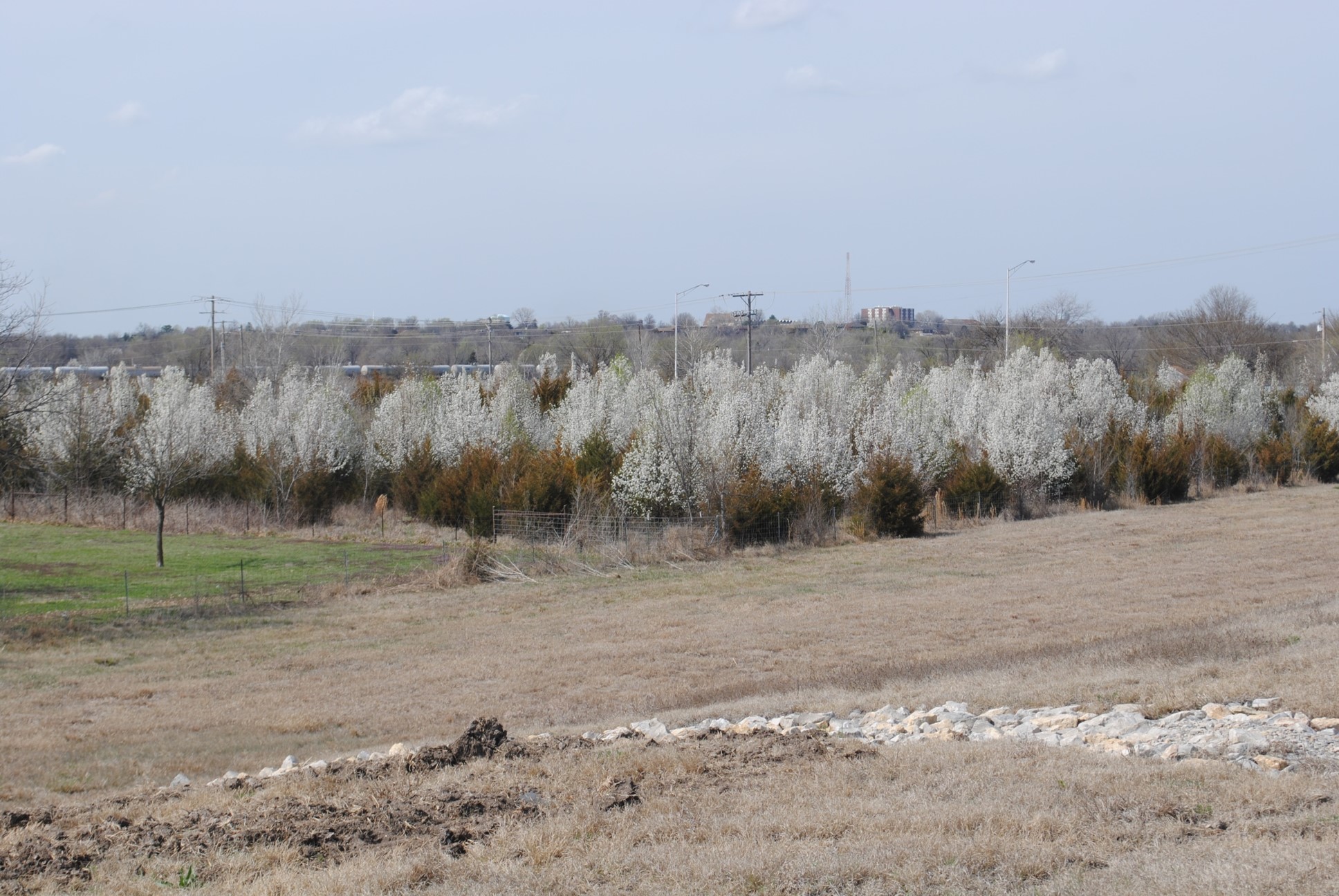 For many years, callery pear (Pyrus calleryana) and its cultivars (‘Bradford’, ‘Cleveland Select’, ‘Aristocrat’, etc.) have been widely planted in Kansas. While this tree is valued for its adaptability to tough sites, consistent spring flowers and fall color, and relative lack of insect problems, it is not without weaknesses. The susceptibility of ‘Bradford’ and other cultivars to narrow crotch angles and resultant storm damage led to the release of cultivars with improved branch angles.
Pears require cross-pollination to produce viable seed, and monocultures of a single clone such as ‘Bradford’ will not produce viable seed. However, the planting of different cultivars resulted in genetic variability in the landscape and ample opportunity for cross-pollination and production of viable seed.

These seeds, spread by birds, have now become established in diverse landscapes across Kansas, from Kansas City to southeast Kansas, and along the I-70 corridor through Wichita and portions of the Flint Hills. For many of the same reasons callery pear was valued in the landscape as a tough tree, it is now proving difficult to eradicate as it spreads into areas where it is an unwanted disrupter and displacer of native and/or desirable vegetation.

Up to this point, much of what has been known about the geographic spread and seriousness of callery pear infestations has come from scattered reports and “drive by sightings.”

A more systematic survey was started in 2018, with the intention of moving from anecdotal accounts of infestations to an objective distribution map, which will allow all affected parties and stakeholders the opportunity to take early-intervention control steps. In using this information, the Kansas Forest Service and its partners seek to direct limited resources to areas where control efforts will be most effective.

A county-level map can be found at the EDDMapS website, here: https://www.eddmaps.org/distribution/uscounty.cfm?sub=10957

As with all weed control, the basic tenets of IPM (Integrated Pest Management) should be considered in order to achieve the desired outcomes. It is unlikely that any one control measure will be successful as a stand-alone treatment in the long term.

There are potentially viable options for control of callery pear with a combination of cultural, mechanical, and chemical treatments, but ongoing assessment is still needed to refine these recommendations. With the emerging invasiveness of callery pear occurring fairly recently, it is reasonable to expect that any recommendations at this point are by necessity preliminary, and will be updated with time and trial.

While callery pear continues to be a reliable and aesthetic performer in the landscape, the threat of invasiveness likely outweighs the benefits of continued planting of this species – especially where other landscape options can be expected to succeed. While it is true that cultivars of callery pear are themselves self-sterile, the existence of other cultivars of pear and wild seedlings provides a sufficient diversity of pollen that viable seed production can be expected even in single-cultivar landscape plantings.

Repeated annual mowing may be effective in controlling young seedlings, and will keep them from maturing into seed-bearing trees, but it will not eradicate callery pear on its own. The use of a mulching head on a skid steer, a brush mower, or other mechanical removal can be effective as an initial intervention on more mature infestations, but should only be used as a means to create access for other control methods, or to create an opportunity for “cut stump” herbicide treatment immediately following the mechanical disturbance.

At the time of publication, few (if any) herbicides specifically include callery pear on the label. However, some herbicides labeled for control of woody plants in rangeland, or for control of invasive plants, or for clearing rights-of-way, may be used according their labels for control of callery pear. Pesticide applicators should always read, understand, and follow all label directions. When in doubt, contact the Kansas Department of Agriculture Pesticide Division for further guidance.

Chemical control of callery pear can be applied in one (or more) of four ways: foliar, cut-stump, basal bark, and soil application.

A foliar treatment is one applied during the growing season, to the leaves and upper parts of the seedling. Callery pear has a glossy, somewhat waxy leaf, so the use of an adjuvant such as methylated seed oil (MSO) appears to be beneficial and is recommended.

Cut-stump treatment of callery pear can be accomplished by treating the cut stem surface of the tree immediately after cutting by a saw, a mower, a brush masticator (“forestry head”) or other such means. This method can be done any time of year, but may be less effective in spring and more effective in fall. It’s important to treat the surface soon after cutting to maximize uptake of the herbicide by the tree. The use of a dye to ensure all stumps are treated, and none are double-treated, is recommended.

A basal bark spray is applied to the circumference of the tree near the ground, and is taken up through the bark of the tree instead of through a cut surface. This method is less labor-intensive than cut-stump in many cases, but in particularly dense infestations access may be difficult. Basal bark spray can be effective year-round, but application in the dormant season makes spray coverage on the trunk much easier.

In some cases, a directed stream of concentrated herbicide placed at the base of the tree is effective. Adequate soil moisture (rainfall) is required, or the chemical may be ineffective.

Based on trials completed in other states, and limited assessment on callery pear infestations in Kansas, the following treatments appear to be generally effective against callery pear, resulting in acceptable mortality. Specific information about efficacy (mortality) of each treatment can be found in the references below. No treatments should be considered completely effective after one application; effective control of callery pear will require follow-up treatments in subsequent years. ALWAYS READ, UNDERSTAND AND FOLLOW THE LABEL.

(Trade names are provided for reference only – no endorsement of these products should be inferred.)